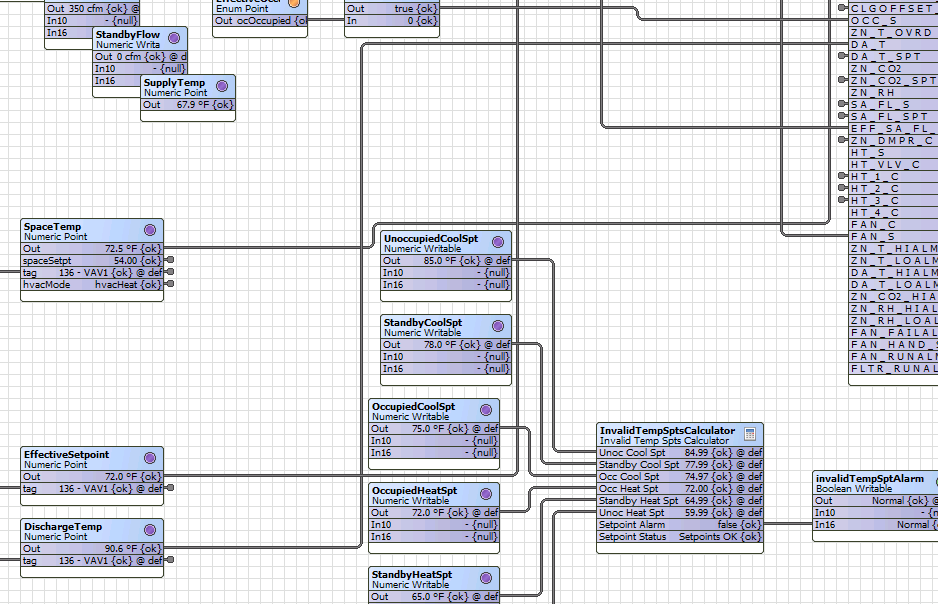 The evolution of Building Automation Systems has done more to improve the day-to-day operation and ongoing commissioning of building systems than any other technology in the past ten years. From my desk I can view and diagnose faulty equipment, analyze energy consumption, and perform supplemental functional testing at a building hundreds of miles away.

While this technology offers superior operability, efficiency, and responsiveness, it also carries the risk of increased system complexity, increased tenant frustration, and even increased operating costs. To combat these potential issues, the best prevention tool is a rigorous Controls Submittal Review.

A Controls Submittal Review is a thorough evaluation of the intended sequences, instrumentation, layout, and equipment that will be installed by the controls contractor. It is typically performed by the mechanical design engineer, commissioning authority, and / or the owner early in the construction phase of the project.

1. Do third party equipment controls their interface with the BAS?
A proper controls submittal review should ensure that the protocols, points, and cabling have been identified for any and all integrations, including packaged controls from a third party vendor.

To reduce costs and complexity, systems are increasingly being specified that rely on packaged controls from the equipment manufacturer. These systems are typically described in both the equipment and controls specifications and can be confusing to integrate with each other. Certain equipment manufacturers can only supply limited points or sequences that are slightly different than those specified by the design. Catching these discrepancies early ensures that all design sequences are incorporated in the final installation.

2. Are the controls requirements compliant with the OPR?
Controls Submittal Reviews compared against the Owner’s Project Requirements (OPR) can identify discrepancies or missing items that would otherwise fall through the cracks.

Often the detailed lessons learned from previous projects are not captured in the contract documents but are picked-up in the OPR that is developed by the Owner and Commissioning Agent. Additionally, any controls requirements specific to the owner’s organization will be contained in the OPR. These are often items with which the controls contractor has little familiarity or experience.

3. Are sensors and instrumentation properly selected for the application?
The Commissioning Authority can help discover potential issues with coordination or incorrect equipment on paper rather than in the field.

Controls specifications and sequences don’t usually include detailed requirements for electrical requirements, scaling, and ranges. The controls contractor is responsible for selecting the proper instrumentation for each application. This can lead to water flowmeters that aren’t precise enough to make control decisions or extra transformers in VAV boxes that introduce a potential failure point in the future. This scenarios are easily preventable, they require access to all design documents and submittals (which a controls contractor typically does not have) and a meticulous eye for detail.

4 .Do the point naming conventions, equipment tagging, and system labels match the design documents?
Comparing the submitted point names against the Design Documents and the OPR is a relatively simple way to prevent inconsistent tagging in the final product.

As Owners, Architects, and Design Engineers spend more time up-front developing complex naming conventions for rooms and equipment, the desire to maintain those names throughout construction and occupancy increases. This simplifies communication and coordination during construction and will help the facilities and maintenance staff to troubleshoot and identify issues during occupancy.

5. Have examples or actual graphics been submitted?
Asking controls contractors to generate their graphics early in the project is a tall order but ultimately saves programmers and integrators time and heartache later in the project.

Owners are asking for actual graphics to be included in the submittals on more and more projects recently. Typical submittals include examples from previous projects but with the rapid advance and iteration of different controls packages, graphics from a year-old project may not be relevant by the time the current project is turned over to the owner.

6.Have any lingering issues from design or Design Reviews been resolved?
Concerns about sequences and points remaining from any Design Reviews should be addressed during Submittal Reviews.

These are typically coordination items that change based on different manufacturers or suppliers. This is also a good opportunity to identify and resolve addendum or RFI / ESI items against the submittal.

Performing a Controls Submittal Review with these six considerations is the first step towards translating a controls design into a functional system. Couple this review with a strong controls specification, sequence of operation, and points list from the design team and you can reap the benefits of a fully utilized building automation system.